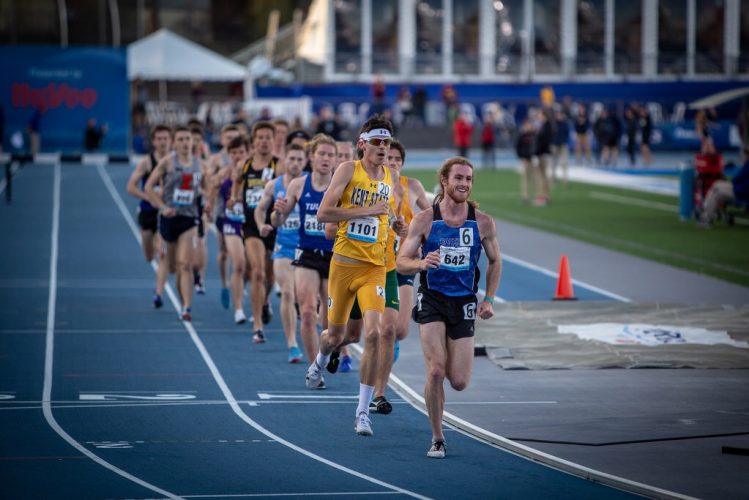 Riley McInerney joined the NE Distance Elite Team as a member of the athlete-in-residence program in the summer of 2019. Riley, a native of Charleston, IL had a very successful collegiate career at Eastern Illinois University. Riley was the team captain of the cross country and track and field teams at EIU his junior and senior years. As an important leader, Riley helped lead his teams to three Ohio Valley Conference (OVC) championships in track and field ('15 outdoor, '16 indoor, '17 indoor). He was three times named All-OVC in cross country ('13, '15, and '16). He was named a part of the NCAA Midwest All-Region Cross Country Team in 2015. He was the indoor OVC conference champion in the mile ('15, '16) and DMR ('15). Three time NCAA West Regional qualifier in the steeplechase ('16, '17, and '18).  Recognizing his academic achievements, he was named one of six Ohio Valley Conference Athletes of the Year in 2017. In 2017, he was was given the EIU Athletic Director Award, and was also named the EIU Male Senior Athlete of the Year.  In his last race for the Panthers, Riley ran his current steeplechase PR of 8:47 to finish 16th which set a school record and capped an outstanding collegiate career.

Riley joined NEDistance to take a next step in his running career. Through working with the coaching staff and training with his new teammates, he hopes to see improvement in all seasons of racing.  From cross country to track and even into road distances as long as half marathon, Riley wants to be competitive and improve on all of his personal bests. With the Olympic Track and Field Trials being moved to 2021, Riley is committed to going after the steeplechase and having the chance to compete for an Olympic team spot.  With a background in education, he has always looked forward to working with youth in a coaching capacity. Riley enjoyed his first season coaching the Woonsocket cross country teams in 2019 and hopes to help grow the program to further success.