WOONSOCKET, R.I. _ Katrina “Katie” Spratford seems most at rest when she is in motion. Shortly after completing her running regimen on the 200-meter indoor track housed at Brown University’s Olney-Margolies Athletic Center, she is already suited up and thinking of workout routines for the students of the Woonsocket Middle School cross country team. One eye on the time, Spratford jogs out the door and to her car where she will now head to school to officially begin her afternoon.

As Spratford parks the car and her feet hit the asphalt beneath a warm summer sun, she bears little resemblance to the woman she remembers being just five years ago.

“I have learned a lot these past five years about how to be a coach and getting the kids what they need physically, mentally, and academically,” said Spratford, recalling how overwhelmed she felt at first about overseeing such a start-up initiative. “It’s had its challenges, but nothing is more rewarding than to see them be successful.”

While the sight of exuberant students boarding a school bus is common, a less familiar scene plays out hours earlier among the student-athletes. With a nudge from New England “NE” Distance, a non-profit community-based distance running project that aims to promote well- being among children, collegian elite athletes turn their focus away from their personal training, grab their clipboards, and run around the park in Providence all to allow interested students the opportunity to pursue athletics.

TO THE START LINE

The program started in fall 2013 when George Nasuti, the then-athletic director of the Woonsocket school district, reached out to NE Distance to gauge interest in
the potential program. The cross country and track teams of Woonsocket were originally disbanded back in 2009 due to school budget cuts. Approved for $6.9 million less by the Woonsocket City Council than the school committee approved budget, the school was forced to withdraw the teams from local junior high competitions.

But that wasn’t the end. Four years later, NE Distance received Nasuti’s inquiry; and the response could not have been better.

With a dual mission to provide mentorship, coaching, and tutoring, as well as to model good habits for health, fitness, and wellness, the year-old Providence-based organization took Woonsocket up on the call.

“We view this program as a fellowship,” said NE Distance President and Founder Nich Haber in a 2012 interview with Hepstrack.com. “Athletes are able to train to be the best they possibly can be. When their window of opportunity as an athlete is over, we are hoping that their time working with the children of Woonsocket will be a benefit to them in their athletic career.”

Along with two of the original members of NE Distance David Goodman and Lara Crawford, Spratford joined the coaching team, adding to her already strong work ethic with after-school programs in the area. At the time revitalizing the Woonsocket cross country and track teams seemed incredibly important. Without them, children in the city had no reliable organized access to further their athletics. That is, however, not to say that the program started off as strong as anticipated.

Growing up in Califon, N.J., Spratford started running cross country in the fourth grade. Approached by the coach at 9 years old, she had a vague understanding of what cross country was and absolutely no long-term plans to keep with it. So when it came time to be co-coach of the cross country and track teams, she reflected back on her childhood and recalled exactly what motivated her to start running.

“The coach of my school’s cross country team told me what it was and to join,” said Spratford. “It was two years later in sixth grade that I decided I wanted to be a pro runner. Running was something I wanted to do for the rest of my life.”

When recruiting began in May 2014, all three coaches made their way to Woonsocket Middle School to talk about the program. For a resurrected program – which had ceased to exist for a total of four years – the interest pool, to the coaches’ astonishment, filled up fast. Before the end of the academic year more than 140 students signed up for the fall season.

But, as the old saying goes: “If it seems too good to be true, it probably is.”

When the first practice took place in August, the number of coaches nearly outnumbered the mere four students who showed up. Spratford knew that in order for the program to be successful the coaches would have to make cross country seem exciting; that it isn’t about wins and losses, but the enjoyment one gets from the act of running.

“[The coaches] certainly had to overcome some challenges along the way,” said Spratford. “We not only had to work with the kids, but also get to know them personally. As a group, it was our job to find ways to keep them focused during practice and stay positive on running for longer distances.”

In an effort to drive interest, all three NE Distance elite athletes spread the word about how accepting, welcoming, and fun the team atmosphere was. Soon enough, more students became curious of what cross country was and began signing up.

Two of these students, seventh grader Derin Paskanik and sixth grader Drew Paskanik, were some of the first to join. Jay Paskanik, Drew and Derin’s father and the
current assistant coach of the Woonsocket High School track team, reflects on how the program has impacted so many lives.

“If it weren’t for the coaches, I wouldn’t have started running or coaching myself,” said Paskanik. “Neither would have my sons. They would probably be playing other sports and they most certainly would not be running.”

This motivated their friends to sign up, and the friends of those students, and so on. By the end of the first month of the season the coaches were able to acquire 50 boys and girls to commit to cross country and establish a mentally strong team lined with a dependable support system.

As practices started to host a larger number of students, many of them couldn’t run for more than 10 meters or 30 seconds at a time. An obstacle that surely needed to be overcome, the three coaches accepted the situation and started to work with the students.

“After talking with the kids, [the coaches] began to set a bunch of goals to show them that they could accomplish more than they thought,” said Spratford. “Soon enough they didn’t see running as a punishment anymore. They caught the running bug.”

In their first season, the Woonsocket team hosted three home meets, which provided the coaches a useful way to track the team’s progress. Posting improvements and
times after each meet on a bulletin board, the students had seemingly improved their time on the 1.4-mile course from 30 seconds to three minutes.

With smiles on the students’ faces and parents in the stands, the program was finally off to the races.

For the next four seasons, the Woonsocket Middle School cross country and track teams continued to make their mark across the state. Competing in meets such as the Ocean State XC Invitational, the students showed everyone the importance of having a team at inner-city schools. 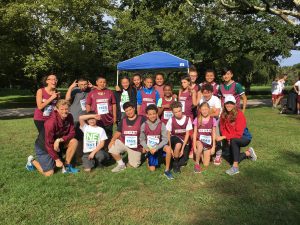 “When you live in Rhode Island, you don’t always hear the most positive things about Woonsocket,” said Spratford. “Hopefully, the work we have done with this program is changing that perception.”

Since 2014, an average of 50-60 students shows interest in the program by attending practices and competing during the season. With an unyielding love for hill sprints – a short, maximum-intensity exercise in which a runner challenges the force of gravity – a significant number of students decide to continue their running pursuits in high school. So far, the program has produced a number of state champions and stars in a variety of cross country and track events.

One such athlete is Derin Paskanik.

A former graduate of Woonsocket Middle School and the track program Derin Paskanik has earned All-American honors in the hammer throw as a junior at Woonsocket High School.

“The Woonsocket cross country and outdoor track programs are vital to the future successes of the high school teams,” said George Briggs, head coach of the Woonsocket boys’ varsity indoor track team. “We look to the middle school to develop distance runners and we are thankful to NE Distance for coming to Woonsocket.”

For many in the community, the Woonsocket Middle School teams have become a staple of leadership and youth involvement, including U.S. Olympian and Providence-resident Molly Huddle.

“It’s been great to see our post-collegiate athletes’ love of running shared with the middle school kids,” said Huddle. “Whether they decide to run track seriously, run the days we have practice or run for fun throughout life, we know they will be happier and healthier for it.”

In spite of it statewide success, the program’s message and purpose has remained the same.

“Our goal is to have fun and offer youth the chance to find the joy and passion in life,” said Spratford. “I know the impact athletics has had on my life. It taught me a lot of life lessons and these kids need that. Kids are being shaped every day and it’s important to shape them into something they want to be but don’t believe they can be.”

HANDING OFF THE BATON

As the fifth season sign ups begin to roll out, the 8-time All-American is saying goodbye to her coaching position, handing off the baton to the next set of co-coaches: Shannon Malone and Caitlin Marino.

New editions to the team this fall, Malone and Marino hope to expand the program and continue its history as a joyful experience.

“As new members of NE Distance, there are definitely big shoes to fill,” said Marino. “There is certainly a lot to look forward to and I hope the kids enjoy it just as much as I will.”

Today, the Woonsocket cross country and track teams have become a living tribute to the much-admired athletic director George Nasuti.

Succumbing to injuries suffered while refereeing a Jayvee basketball game at Burrillville High School, Nasuti died, just a year after reaching out to NE Distance for assistance in reviving the teams.

In a short amount of time the program once spearheaded by Nasuti has been realized. Not only has the program continued to persevere despite bus strikes in 2018, it has done so with the confidence and trust of parents and with the help of NE Distance elite athletes.

“For us, it’s a big honor to carry on George’s legacy,” said Haber. “We like to do anything we can to honor his memory and use sports as a way to bring the community together. That’s what he was all about. We want to be a part of his legacy.”

As Spratford puts down the clipboard, she cannot help but reminisce in all of the experiences the program has provided her. While this most certainly does not mark the end for her involvement with youth across the state, she will never forget what it felt like to attend each school discussion, each practice, and each meet.

“I was just so excited to see how driven they were,” said Spratford. “Regardless of the zip code, it’s a really great thing to get kids involved at such a young age because they learn to set goals, set dreams, and chase them.”