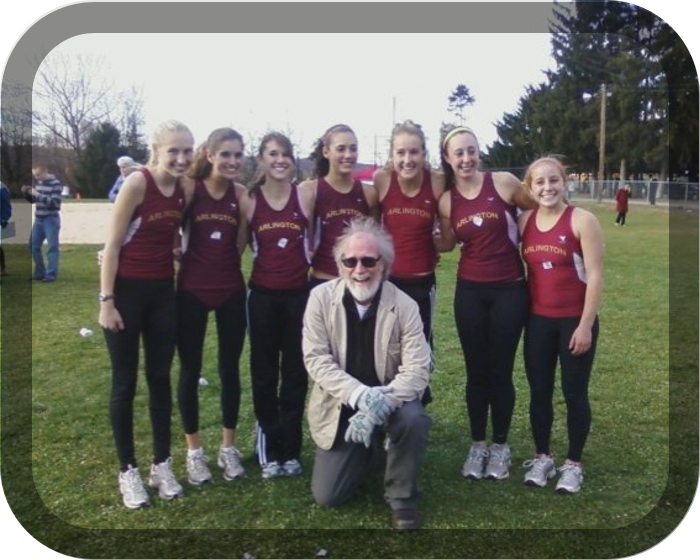 You cross the finish line just barely ahead of a girl in red. You caught her in the last 200m as you were cresting that final, terrible hill in the woods. For a second you’re proud of yourself for catching her, but then you remember there was another girl in red. You didn’t catch that one. Immediately your mind begins to race. You let them go. How could you let them go?

You stagger over to your teammate who finished ahead of you.

Through gasps of breath she replies.

You breathe out a small sigh of relief. We’re winning through two.

You turn back to the finish line just in time to see another one of your teammates charging down the final straightaway. She has just had the race of her life. Your heart soars. You are so happy and so proud.

But before you even have time to be excited that you’re winning through three, you see two more girls in bright red jerseys with white lettering come flying through the finish. Crap, that’s their 3rd and 4th.

Just behind them you see your 4th battling none other than their 5th down the home stretch. You hold your breath. Your 4th is not someone who is known for their kick, but somehow over those final few meters she finds another a gear, a gear no one even knew she had, and holds off their 5th.

Ten seconds later your 5th comes in, two places behind their 5th.

Your 6th and 7th come in shortly after, both well ahead of their 6th. You were clearly the deeper team, but the question still remains: were you the better team?

You immediately start trying to do the math in your head. You know your team went 2 – 5 and that theirs went 3 – 6, but after that it gets hazy. Was your 3rd one or two places behind you? Was their 3 – 4 duo two or three places behind her? You just don’t know. And even if you did it would be useless; you’re too exhausted to do the math.

The only thing left to do is wait.

As you gather your team and start to walk back to your tent, you are approached by several spectators claiming they know the results.

“It was a tie through five but your 6th secured the win.”

You smile politely and continuing walking; you learned long ago not to trust the calculations scribbled on the back of a grocery store sales receipt. Only when you see the typed, printed number next to your team’s name will you believe.

You get back to your tent and see your coach. He too looks exhausted, and you’re not surprised. You saw him no less than four times during the race, and there were no loops on the course.

“You did good kid. The team did good. It’s going to be close.”

As you begin the painstaking process of untying your quintuple-knotted spikes, you fix your gaze on the wall of the pavilion, the one that is peppered with staples and decaying bits of paper.

Your parents come over to congratulate you on your performance and tell you how proud of you they are. Momentarily you are distracted from the wall, from the fact that, any minute now, your team’s fate will be revealed by a few numbers in black and white ink.

Then suddenly out of the corner of your eye, you see him. He’s wearing a white long sleeve with a blue collared shirt over top and blue matching hat. His identity is unmistakable. He is the official, and in his hand are a two white pieces of paper.

By now the rest of the team has seen him. An ominous silence befalls the group as they watch him slowly, deliberately walk over to the pavilion wall.

He takes a tiny stapler from his pocket.

Eight little punches later, and the results are officially posted.

You turn and look at your teammates. No one is moving, and neither are you. You’re all frozen in place, terrified of leaving the safety of what could be and entering into the realm of the cold, hard truth.

Your coach comes up to you.

You break the spell and take a step. You take another and then another. Finally, after what felt like an eternity, you arrive at the wall.

There’s already a small crowd of people peering at the results, but you pay them no mind. Their faces blur and their voices fade until it’s just you and the wall and the paper and the staples.

You take a deep breath, close your eyes for one last moment of blissful ignorance, and then look.

You blink and look again. You double check and triple check to make sure what you’re seeing is real. By the fourth time you see it, see that tiny number 1 next to your team’s name, you know it is real.

A wave of emotion crashes over you.

You turn to find your team huddled just behind you, their arms locked and their eyes wide.

A smile creeps over your face and your eyes begin to fill with tears as you whisper the words.

An Ode to Cross Country: “The Wait”