On a cool and overcast evening in Portland, Oregon, NE Distance Elite team members Dylan Hassett and Katie Spratford took to the outdoor track at Lewis and Clark College to compete in the 10,000m at the Portland Track Festival. In a race featuring some of the nation's best distance runners, the pair more than held their own as they competed fiercely throughout the 25-lap race. Dylan finished 7th overall in a new personal best of 33:06.92, a time which broke the NE Distance all-time 10,000m record. Katie finished a few strides back in 9th place with a time of 33:28.18, just a few seconds shy of her personal best. Full results from the race can be found here. We caught up with them below to hear more about the race and their trip!

Q & A with the NEDi Ladies

Dylan - You’ve run three 10ks on the track so far this season and each one has been faster than the last:

To what do you attribute this steady improvement? What have you focused on in training over the last two months to help you drop an incredible 60+ seconds off your personal best in this event?

Dylan: Earlier in the season Kurt first had me doing a lot of quality aerobic work – harder long runs, hills, cross training, etc. I was coming back from an injury so a lot of this was mixing up as much running with cross training as possible, without being reckless. As we’ve gotten later into the season, we’ve done some really fun 3K/5K workouts that have made me feel a lot sharper and confident from all of the tedious cross training I was doing earlier in the year. The work has also just felt better throughout the season as I gained fitness and also was finally running workouts again with the girls; there’s just so much more energy in group work as opposed to a lonely cross training session. I felt a little behind schedule going into this season but Kurt worked some magic!

I think there’s been a huge mental aspect to things this season as well – I was injured last year so I’ve been really hungry to run fast for awhile now. Kurt has also been telling me to trust my fitness more as opposed to obsessing over paces – and we’ve been practicing this in workouts. But this past race I really just shut off my mind and told myself that I could handle whatever pace was being run.

Katie – You jumped into this season head first by opening up at one of the country’s most prestigious track meets and running within a few seconds of your personal best. Even more impressive is the fact that this was your first race in four months, let alone your first track race in over a year. How did it feel to be back out there on the oval? What were your goals and expectations for this race knowing that most of your competitors had already raced numerous times this season?

Katie: It has been quite a while since I’ve raced on the track and I must say it was really fun to get back out there! My approach to this race was simple: stay composed and compete. Ideally, I would have run at least one or two races prior to this one, but I had a foot issue crop up in April that pushed everything back a bit. I try to not focus too much on what other people are doing or where they are at in their season, but it was evident that I was missing that track sharpness when a move was made around 5k and I just couldn’t get my legs to go with the pack. I was hoping to run under 33:00 but I am focusing on the positives from the race.

Dylan and Katie – A look at the lap splits from the race shows that you two were nearly side-by-side for the entire first half of the race. Did you two plan to run together ahead of time or did you just naturally end up near one another once you settled in? How did it feel having your teammate right there with you?

D: We planned on running most of the race together, especially from the start. We weren’t sure if there would be a pack to run with, so our backup plan was to trade off every few laps if it ended up being just us two! It’s comforting to have a teammate in the race with you – when you’re just trying to run a fast time, it’s massively easier to know that there’s at least one variable you can control, and it’s not a bad option to get after a fast time with someone who’s willing to do 50% of the work with you.

K: Our main plan was to run together for as long as possible, just like in practice. In all honesty, I wasn’t sure where Dylan was after the gun went off. I found myself at the front of the chase pack and was just hoping she was right there. It is a great feeling to have a buddy to go through the entire travel/race day process with because it keeps you level headed. We were able to keep each other calm yet excited. She was extra motivation for me because I knew she was ready for a big day and I was trying so hard to get up with her after the 5k mark.

D&K - Traveling all the way across the country to compete at an elite level meet against some of the nation’s top distance runners sounds a little intimidating. How did you guys stay relaxed and confident as you undertook this big trip?

D: It can definitely feel like there’s more pressure on a race when you commit to traveling so far to a big event like this. But I try to view it as an opportunity to be even more excited, as opposed to more nervous or stressed. Usually I’m so excited before leaving on a big trip like this I can’t sleep! These trips are also easier to relax on when you travel with a teammate. It’s all just more enjoyable with company - we watched lots of Portlandia and took lots of naps.

K: It is important to control what you can and forget the rest. Travel can be a bit stressful so you have to learn to be flexible. I try and stick to my daily routine as much as possible with plenty of snacks, naps, pre-run activation, basically doing whatever I need to do to feel ready. Having traveled and competed internationally over the past two years has helped me gain confidence in my travel routine and knowing that I belong on the starting line

D&K – The 10,000m is one of the most mentally grueling races in all of track and field. Do you have any mantras or mental tricks you use to stay focused for 25 long laps? What advice would you give to someone who is preparing to run their first 10k on the track?

D: It’s funny – I guess my advice for all 25 laps would be to not focus. Usually if I find myself counting the laps and looking at the clock then I’m likely not having a great race. My advice would be to just race the people around you. It’s a little bonus challenge to us distance runners because our job everyday is measured by numbers as we keep track of our times/splits/distance, but when you’re out there to race a 10K you kind of have to let go of that mindset, and that’s taken me awhile to understand. I have two mantras: be brave and trust yourself. They’re cheesy but significant to me and I pick one depending on my mood!

K: I believe that mental training is really important! Recently what has worked for me is taking some quiet time, about 30 min out from warm up, to get in a positive mental state of confidence and ferocity. I created a list of positive things to remember and I pick one or two that resonate with me on that day. I like to repeat it to myself during the race, especially when it gets tough. This past race I used “stay composed” and “give yourself a chance, even if it hurts.” My advice is to stay as relaxed and composed as possible through 4 miles, then go for it! Trust your race plan and believe in your ability to tough it out when the race gets hard.

D&K – Aside from having a pair of awesome performances, what was your favorite part of the trip?

D: We drove past a Goodwill and decided we couldn’t resist checking out what kind of hodgepodge a Portland Goodwill has to offer. So we did some retail therapy and left with some lovely Portland flannels (will not be worn until washed).

K: I really enjoyed soaking up the nature in Portland! We walked around a really nice park-the trees are so grand and beautiful. 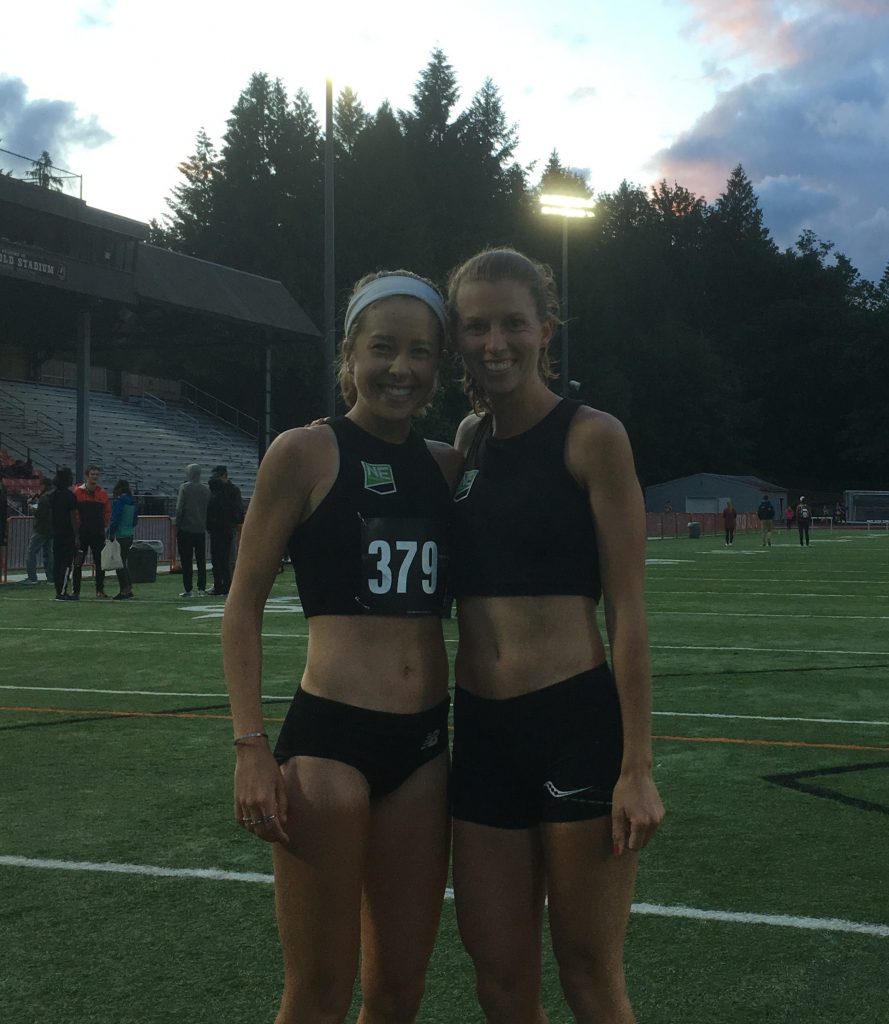 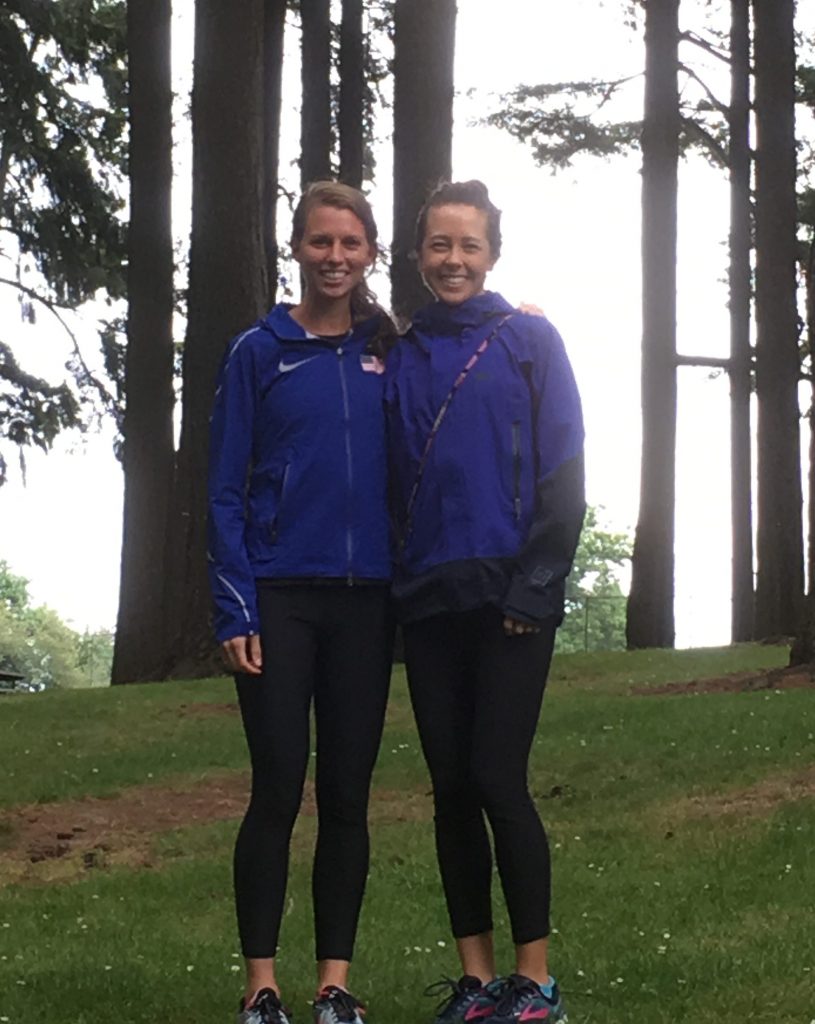