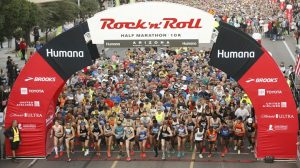 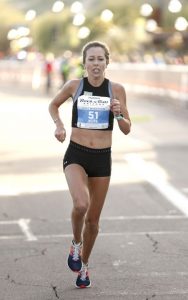 In her first ever Phoenix race and third half marathon, Hassett crossed the line with a time of 75:13, placing her 2nd in both her division and gender and 25th out of 25,000 participants.

“[Coach and I] set fitness goals coming into this race and I think I proved today that the fitness is there.”

Hassett, a specialist in long distance running, prepared for Phoenix by intertwining volume and tempo runs, which proved to lead to great success on a perfect day for running.

“It was hillier than I had thought it was going to be, but the effort was there and I persevered. Overall it was a good race.”

Hassett hopes to carry this positivity into her upcoming races when she competes in the European Champion Clubs Cup Cross Country in Albufeira, Portugal on Feb. 3 and a spring marathon in Europe. 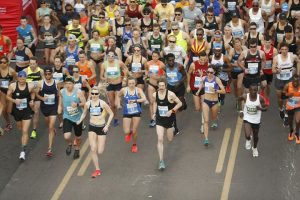 In his first ever half marathon, Sterling finished with a time of 66:30, placing him 5th in his division, gender and overall.

Since December, Sterling has been in Flagstaff for altitude training. It was only after talking with his coach that he decided to enter the race.

“Recently I’ve had more experience running higher mileage and this race served as a benchmark to see where I would be. My goal was simple: a lot of running at a 5 minute pace.”

Finishing with an average pace of 5:04/mile, Sterling was ecstatic to know that he had successfully met his goal in a race that challenged his experience in the mile, 3k and 5k; so much so that he is eager to start searching for similar opportunities in the near future.

“Oh yeah. As soon as I crossed the finish line I thought I might have left a little on the course. I am already planning on running another.”