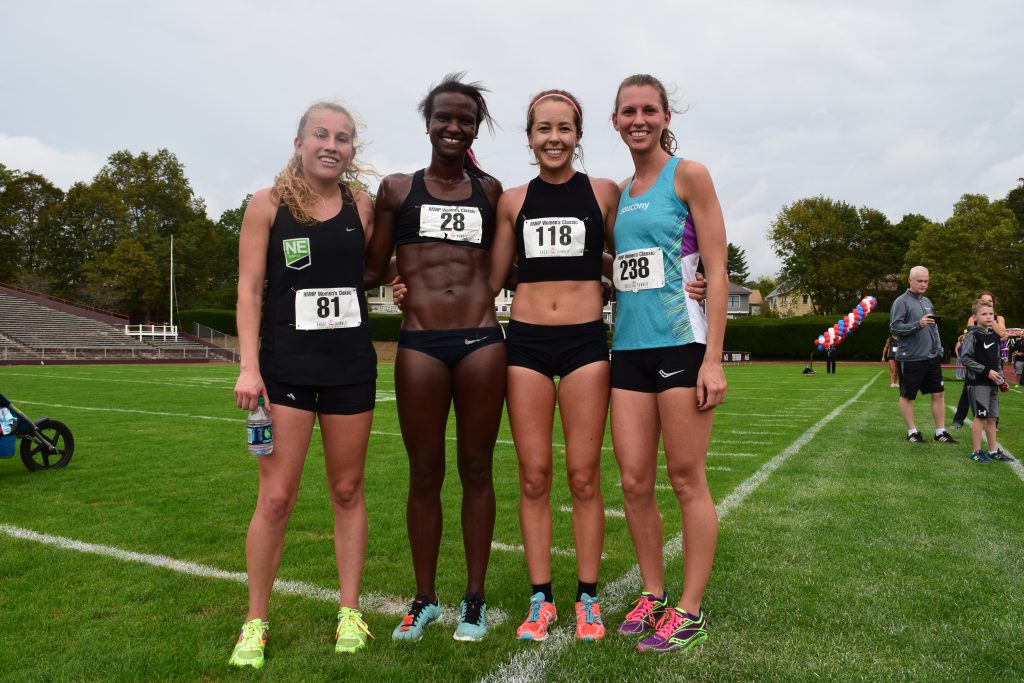 On an overcast and dreary day that lacked even the faintest ray of sunlight, the NE Distance Elite Women’s Team found a way to shine all its own. The NEDi ladies took to the streets of Providence this past Sunday to compete in one of the city’s most iconic events: the 10th Annual Ronald McDonald House of Providence Women’s Classic 5k Road Race. Despite a stiff wind and the dark, threatening clouds that loomed overhead all morning, the quartet of runners remained poised and confident. The ladies faced some great competition from local Saucony-sponsored athlete, Aisling Cuffe, and road racing veteran, Kaela O’Neil, of the Boston Athlete Association, but together they put on a dominating performance to win the team competition with a perfect score. Full results from the race can be found here and a gallery of photos from the race can be found below.

The team was led by Obsie Birru who finished 2nd overall in a personal best time of 16:43, just 7 seconds behind winner Aisling Cuffe. Obsie, who most recently took 19th at the highly competitive USATF 20k Championships on Labor Day, was grateful for the opportunity to compete alongside her teammates for first the time. “It was fun to get out and race with the other NEDi women. I loved having the support of my teammates, our coach and all our friends.” Regarding the race itself and her performance, Obsie was pleased but still hungry for more. “It’s good to just check in and see where I’m at as far as racing goes. I still have many aspects that I can improve on, but overall things are going well. I’m happy to have run a road 5k PR, but I’m still not completely satisfied.”

Just steps behind Obsie was teammate and housemate, Dylan Hassett, who finished in 3rd place with a time of 16:46. “Yesterday was the perfect opportunity to make a team presence (with the team win!) and to get in a solid race effort, both of which we accomplished.” For Dylan, who ran the Acushnet 4 Mile Road Race on Labor Day only as a workout, Sunday’s race had added significance. “I also had a personal goal to walk away with some newfound confidence as this was my first race after a long break from racing due to injury. I really just focused on staying with the top pack alongside my teammates and Aisling and competing to the best of my ability without thinking about time or pace. It was so encouraging to race as a pack and work together. I really feel like this race is a positive step towards improving my fitness and confidence.” Like Obsie, Dylan also walked away from this race with a great deal of excitement for the future of the blossoming NEDi Elite Women’s Team. “As a team I feel like we are only scratching the surface of our potential as we still have some big weeks of workouts ahead of us and we were also missing our fifth, Rachel. I can’t wait to see what we are capable of doing in a few months!”

Rounding out the scoring squad was NEDi veteran, Katie Spratford, who also dipped under the 17:00 barrier with her time of 16:55, which notched her a 4th place finish. For Katie, Sunday’s race really showcased just how much she has improved since joining NE Distance four years ago. In 2013 she won the Women’s Classic with a time of 17:54. Two years later in 2015 she won it again, that time running 17:20 to take the title. To come out and run another huge personal course record in her seasonal debut speaks volumes to her growth and consistency as a runner, and bodes extremely well for what is to come later in the season.

Completing the NEDi quartet was Paige Ethier, who snagged 6th place in her debut race representing NE Distance. As a native of Rhode Island, Paige had also previously competed in the Women’s Classic and, like Katie, her performance this year marked a big improvement. Her finishing time on Sunday of 18:50 was a whooping 53 seconds faster than when she last competed in the Women’s Classic back in 2014. For Paige, Sunday’s race also marked something of a re-entry into the world of competitive running. After completing her collegiate eligibility at URI last May, Paige ran a handful of local road races over the summer for fun, but hadn’t resumed consistent training until she joined the NEDi team in early September. With her sights set on being a solid scoring member of the team come championship season, her gritty performance on Sunday was a great first step towards being ready to go come December.

Although the fall season is just getting started, the ladies’ strong performance in their first real test of the season shows that the newly minted NE Distance Elite Women’s Team is well on its way towards achieving its big goals later this year.

Next up for the ladies will be their first cross country race of the year, the Mayor’s Cup Cross Country Championship which will be held in Boston at Franklin Park on October 22nd. The women’s race will be 5k while the men’s race, which will also feature an NE Distance squad, will be 8k.