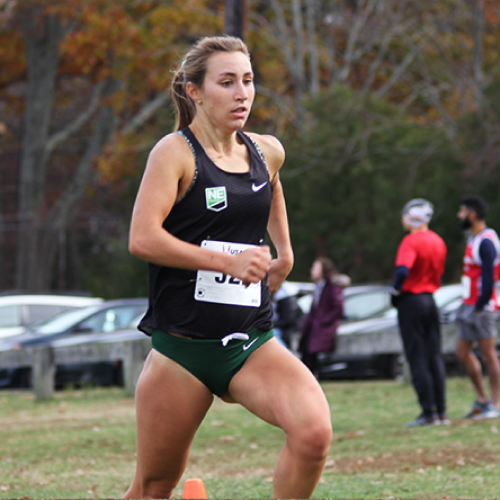 "Run hard when it's hard to run." -Pavvo

"Be not afraid of greatness, some are born great, done achieve greatness and done have greatness thrust upon them." - Shakespeare

Caitlin Marino joined New England Distance in 2018 after graduating from Jacksonville University. Caitlin is a Rhode Island native and cut her teeth racing through Rhode Island in her youth. She is a 2013 graduate of La Salle Academy in Providence, and was a part of a state record 4 x 800m relay at the New Balance Outdoor National Championships. At Jacksonville University, Caitlin started as a walk-on but achieved All-Atlantic Sun Conference (ASUN) in cross country, indoor and outdoor track and field by her junior year. In 2017, Caitlin was All-ASUN indoors placing 3rd in the 5,000m and was a part of championship Distance Medley Relay team. That outdoor season, she earned All-ASUN honors finishing 3rd in the steeplechase.  In 2017-2018 seasons, Caitlin earned All-ASUN honors in cross country for the second time, as well as the indoor campaign in the 5,000m. She was the ASUN conference champion in the steeplechase in 2018. Caitlin graduated with her Bachelor's degree in Kinesiology in 2017, and returned to Jacksonville University to complete a Masters in Business Administration in 2018.

For New England Distance, Caitlin has raced frequently around New England and enjoys lining up for races with teammates. In the 2019 fall season, she placed 3rd at the USATF New England Cross Country Championships. Her goals include breaking 17 minutes in the 5,000 meters and running under 9:40 in the 3,000 meters. Her time with NEDistance has seen her coaching among several schools, but she has most recently and importantly been instrumental in helping lead the Woonsocket Middle School teams in cross country and track and field.

She is currently enrolled at Providence College pursuing education in medicine to work towards a career in pediatric orthopedics.