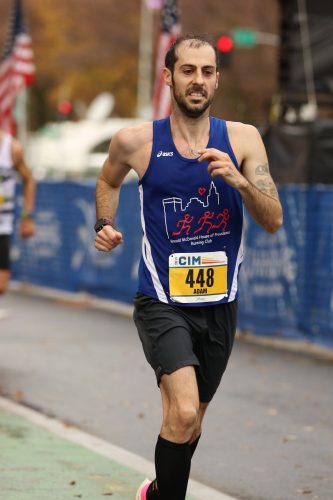 Adam Malek joined NE Distance at the start of 2020, just weeks after his marathon debut at the California International Marathon in Sacramento, CA. Adam put up a number of  strong performances in 2019, running personal bests in 4 different distances (800m, 8k, 10k, and marathon). Additionally, he won the USATF New England All Terrain Series. He trained while working more than full time and running a small business. Adam relocated to Providence, Rhode Island in order to start his career at the Department of Veteran Affairs. He considers the city his home and feels a strong attachment to his neighborhood on the East Side of the city.

Adam’s high school running experience was limited as he only ran in his junior and senior years. He was a standout for an inner-city school not known for its cross country and track and field programs. The highlight of his high school career came during his senior year (2006) when he won his league championship in the 2 mile and 800m distances. With the victory in the 2 mile, he broke a school record that stood since 1964. He still owns that record to this day along with the cross country course record on the school's 2.8 mile course.

Following high school, Adam would compete collegiately for 1 year. Although he showed promise, his life would change as he longed for an untraditional path. He would enlist in the United States Air Force. Following his military service, he began coaching cross country and track and field for both middle and high school students. This inspired him to get back into competitions. He would attend USATF Level I and Level 2 coaching schools for the endurance events. Years of training solo would follow. With each passing year, his incremental improvements would lead to him becoming a strong runner on the USATF New England road circuit.

So far, Adam has won the USATF New England Indoor Track and Field Championship in the 5,000m run (2012), The USATF New England Cross Country Grand Prix (2012), and The USATF All Terrain Series (2019). He is a Boston Marathon qualifier, and would like to add the Olympic Trials to the list in the marathon one day. His goal is to continue to run personal bests while remaining humble, friendly, and approachable.

Adam has worked at the Department of Veterans Affairs for 8 years now. He hopes to start a family one day and leave the sport on his own terms. Additionally, he has financial goals and climbing Mount Everest is a big item on his to do list. Outside of the sport, he loves traveling and donating to causes that he’s passionate about. This includes the Ronald McDonald House of Providence and Roger Williams Zoo locally. He’s a student of athletics in general, possessing a wealth of knowledge about hockey, wrestling, and running. Adam can speak French and Spanish at conversational levels. He has a Master’s Degree in Occupational Health and Safety.