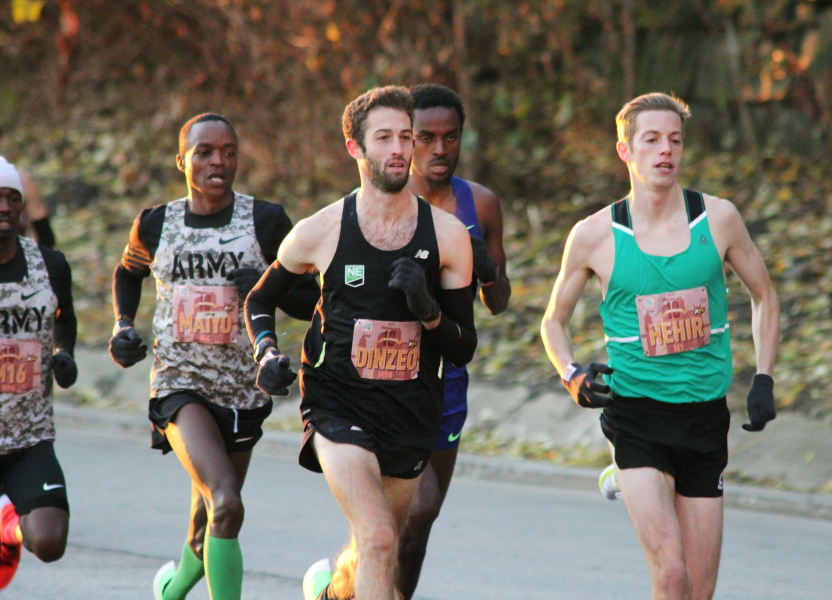 "Mind is everything. Muscle - pieces of rubber. All that I am, I am because of my mind." ~ Paavo Nurmi

Aaron, a 2015 graduate of California University of Pennsylvania (Cal U), joined NE Distance in the winter of 2017. Under the guidance of Cal U coaches Daniel and Jacqueline Caulfield, Aaron was a 7-time All-American and was named Pennsylvania State Athletic Conference (PSAC) Track Athlete-of-the-Year in 2014. Aaron currently holds school records in the 5K, 10K, and Distance Medley Relay and his 10K PR of 28:40 is the record across all PSAC schools. Not one to slack off in the classroom, Aaron majored in Archaeology and Forensic Anthropology and was named Academic All-American 3 times during his college career.

After graduation, Aaron moved to Alamosa, Colorado to train at altitude with a professional training group. In his year there, he achieved a runner-up finish as the 2016 USATF Cross Country National Championships, which qualified him to run for the US at North America, Central America and Caribbean Athletic Association (NACAC) Cross Country Championships in Caraballeda, Venezuela.

In his time with NEDistance, Aaron has organized and coached the NEDistance Community Running Club. Members of which have run numerous races around New England as well as qualified for the Boston Marathon. As an athlete for the elite team, Aaron has run great races in several distances. In 2019, he recorded personal bests on the road in distances at 10k, 10-miles and the marathon. He finished 3rd at the EQT Pittsburgh 10-miler against a stellar field in November of 2019. A month later, he ran the California International Marathon with former NEDistance teammates Henry Sterling, Katrina Spratford, and Obsie Birru. All four recorded performances that qualified them for the 2020 United States Olympic Marathon Team Trials in Atlanta, Georgia. Aaron ran 2:18:35 at CIM. In Atlanta, Aaron raced admirably, and although started strong and moved up through the field, he inevitably succumbed to the rigors of the difficult Olympic Trials course in Atlanta. Despite hitting the wall, he persevered to finish in 148th.

Aaron continues to look forward to furthering himself as a competitive athlete, team member, and individual while at NE Distance. He is excited to share his knowledge and experience with a younger generation to embolden their love for running.